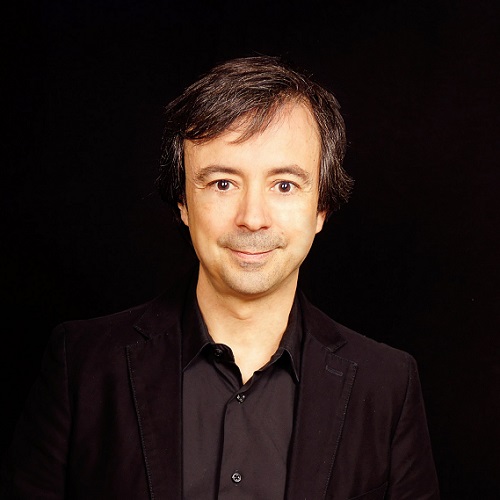 Vasco Negreiros was born in Portugal, and emigrated to Brazil at ten years of age, where he began piano lessons and music classes. He later studied viola and singing, having first specialised in choral conducting.

In Germany, he concluded a conducting course at the Musikhochschule Karlsruhe, followed by a post-graduate degree (KapellMeister Ausbildung), in both orchestral and choral conducting at the Musikhochschule of Mannheim-Heidelberg. He finished his PhD in 2005 under the academic supervision of Owen Rees (Oxford University), which resulted in the publication of a facsimile of the Livro de Vários Motetes by Frei Manuel Cardoso, edited by Casa da Moeda – Imprensa Nacional de Portugal.

As a conductor, he regularly conducts the Vocal Ensemble, and works as a guest conductor with a variety of choirs and orchestras in Portugal and abroad, frequently for performances of early music or of his own compositions.

In 2005 he launched a triple CD which included the entire Livro de vários motetes by Frei Manuel Cardoso, under the Althum label. In 2015, his research on Jerónimo Francisco de Lima resulted in the recording of Rabbia, Furor, Dispetto, by the Paraty label of Paris, which has received international acclaim.

He released the CD ‘O Gato das Botas’, an educational orchestral work for children under the mPmP (Movimento Patrimonial pela Música Portuguesa) label in 2012.  In 2022, the label 9 Musas launched his CD LASSO Mus. Hs.18.744, which features the entire manuscript from the National Library of Austria, with the collections of the Orlando di Lasso motets Sacrae Lectiones ex Propheta Hiob and Prophetiae Sibyllarum, considered by the journalist João Chamber to be the best yet recording of the latter.

Vasco Negreiros is a Professor of Conducting and other practical, theoretical and aural curricular areas at the University of Aveiro.

He has published a range of musical editions, principally in the field of Historical Performance Practice, and has presented his musicological research in conferences, articles and books.

Apart from his conducting work, Vasco is also a composer and was awarded a prize for his piece Amen, for children’s choir, at a competition in Bulgaria.

In 2013 he was the guest composer for the celebrations of the 500th anniversary of St. Teresa in Ávila, while in 2017 he held an artistic residency as guest composer and conductor of the Ketewan Festival in India. In 2019, he was the guest composer and conductor of the Festival Estoril Lisboa, for which he wrote the work ‘Peregrinações – sobre o livro de Fernão Mendes Pinto’, presented at the Mosteiro dos Jerónimos by the actor Luís Miguel Cintra and the Orquestra Metropolitana de Lisboa. In collaboration with the actor Pedro Lamares and the artist Beatriz Bagulho, in 2022 he wrote the music for the show O Sétimo Sol, focusing on environmental issues for an audience of children.