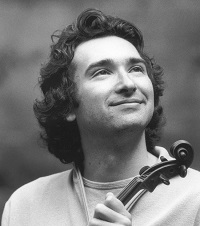 Born in Brussels, Eliot Lawson is of Belgian and Luso-American nationality. He studied the violin with L. Souroujon, H. Krebbers, I. Oistrakh, J.J. Kantorow, P. Vernikov, N. Shkolnikova and I. Grubert. The titular holder of a master’s degree in music, awarded “with greatest distinction” by the conservatories of Brussels and Rotterdam, he also obtained the “Artist Diploma” of Indiana University in Bloomington and a “perfezionamente” diploma from the Fiesole Music School in Italy. Currently he is in finishing his PHD degree at the Evora University.

A laureate and finalist of several national and international competitions (including Brahms, de Beriot, Premio Jovens Musicos, Mozart, Proce Vitate, Vieuxtemps, Maasmond, Lantier, Krebbers, Premio Vittorio Gui semi-finals, Tibor Varga semi-finals, Cardona competitions), Eliot Lawson has given many concerts in Europe and the United States, appearing on numerous important stages and invited by the radio and television in Portugal, Holland and in Belgium.

He teaches violin in the conservatory of Amsterdam and in the Scuola de Musica di Porortogruaro, Mons conservatory, de Kunsthumaniora and the University of Minho. He is regularly invited to give masterclasses in Belgium, Luxemburg, France, Portugal, Italy, Turkey, Hong Kong and the United States. He recorded many CD’s for labels such as Cypres, Phaedra, Zed classics, Azur Classics and Fuga Libera receiving excellent reviews in magazines such as the Strad, Diapason (5/5), Crescendo (Joker) and the golden label.