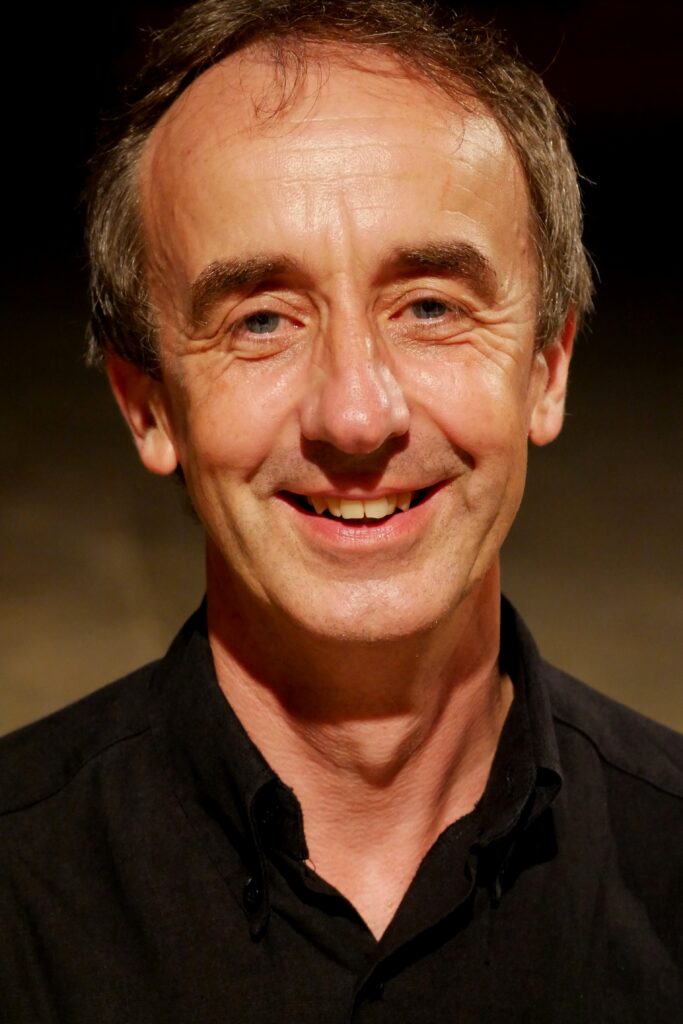 Brian MacKay chose Portugal as his home over 10 years ago where he has built a diverse and exciting career while maintaining strong musical ties to his native Ireland.

His early career focused on orchestral work (as an oboist) and chamber music (oboe and piano), while developing experience as a conductor with a variety of orchestras and amateur choirs. Chamber music has always had a special role, earning him, with the Addison Trio, the Latham Koenig Award for Wind Chamber Music from the Royal College of Music, as well as Royal Overseas League and Park Lane Group awards in London. The latter involved the commissioning of new works from composers Timothy Salter and Edwin Roxburgh, presented for their premiere at the Purcell Room on the South Bank. The Trio worked for several years for Yehudi Menuhin’s ‘Live Music Now’, playing concerts in unusual venues throughout the country.

During this period, Brian taught at the Royal College of Music Junior Department, the City of London School and Morley College, an exciting mix of highly talented young people and enthusiastic adults. At the same time, he dedicated himself to directing community choirs, orchestras and professional-level ensembles such as the Guildhall Chamber Orchestra (Northern Ireland), Essex Chamber Orchestra (ECHO) and the BBC Club Choir (London). Both activities reflect his enduring commitment to the importance and potential of including professional, amateur and community integration in music making.

A strong motivation for professional development and the acquisition of more effective teaching tools led him to a second period of advanced study in Hungary, focused on conducting (orchestral and choral), vocal training and accompaniment and coaching with singers. During his stay in Hungary, he sang with Ars Nova, a professional choral ensemble, becoming a lifetime honorary member for his services to the group.

Back in Ireland, Brian’s career became oriented towards professional conducting, repetiteur work, vocal training and song recitals, which led to the foundation of the Irish Vocal Masterclasses summer school.

During the succeeding 10 years, he conducted concerts with the National Symphony Orchestra of Ireland, the Irish Chamber Orchestra, the Orchestra of St. Cecilia, Chamber Choir Ireland, Czech Virtuosi in Brno, Nairobi Orchestra in Kenya, Fishamble Voices, Enchiriadis Treis and St. George’s Singers in Belfast. He worked as a Repetiteur and Music Director at the International Wexford Opera Festival for two years, and as a Repetiteur with the Opera Theatre Company in several productions, before returning to the company as conductor. During his 8 years with Castleward Opera, in Northern Ireland, Opera Theatre Company, ILEA Opera (London) and others, Brian has conducted, productions of La Bohême and La Rondine, by Puccini; the Da Ponte operas of Mozart; Albert Herring, The Beggar’s Opera and Rape of Lucretia by Britten; Hansel and Gretel, by Humperdinck; Carmen, Bizet; Orfeo ed Euridice, Gluck; Janáček’s The Cunning Little Vixen; Un Ballo in Maschera and Don Carlo, by Verdi; Lucia di Lammermoor, Donizetti; Handel’s Giulio Cesare; Dido and Aeneas, Purcell. In 2006 he had the honour of being invited to direct the Opera Theatre Company production of Janáček’s The Cunning Little Vixen at the Janáček Brno Festival with the Czech Virtuosi Orchestra. In his last 2 years of residency in Ireland, he was the principal conductor of Chamber Choir Ireland.

During this period, his teaching activity focused on vocal coaching, musicianship training at Dublin City University, presidency of the Kodály Society of Ireland and Irish Vocal Masterclasses, in addition to regular invitations to give masterclasses at various summer courses. His 10-year association with the Nairobi Orchestra led to consultancy work for KENMUTA, a Kenyan government association supporting music teachers from all around Kenya. He has been a guest teacher at the Liszt Academy in Budapest and at the Royal Conservatoire of Scotland.

On arrival in Portugal, he founded the ZêzereArts Festival, now in its 12th year. He has given recitals and conducted concerts throughout the country, at institutions such as the Calouste Gulbenkian Foundation, Teatro São Carlos, Palácio Foz and Teatro Aberto in Lisbon. The eclecticism of his aesthetic orientation led to the invitation to conduct a concert with the jazz trio PLINT (Pablo Lapidusas International Trio) in 2018, in the Artes à Rua Festival in Évora.

During an 8-year association with Musicamera Produções, of which he is an associate director, he has been responsible for the artistic direction of various projects, including four editions of the Festival CriaSons, dedicated to Portuguese contemporary music, the projects Descobrir Noronha ‘The Portuguese Paganini’ and ‘Beethoven and Bomtempo’ (Portuguese celebration of the 250th anniversary of Beethoven), among others.

He has conducted works by Portuguese composers such as Eurico Carrapatoso and premieres of works by Cândido Lima, Fernando Lapa and David Miguel.

The result of his enthusiasm and dedication to new works culminated in premieres of two new large-scale Portuguese operatic productions, creations of the composer Amílcar Vasques-Dias – Soror Mariana Alcoforado (2017) and Geraldo e Samira (2019).